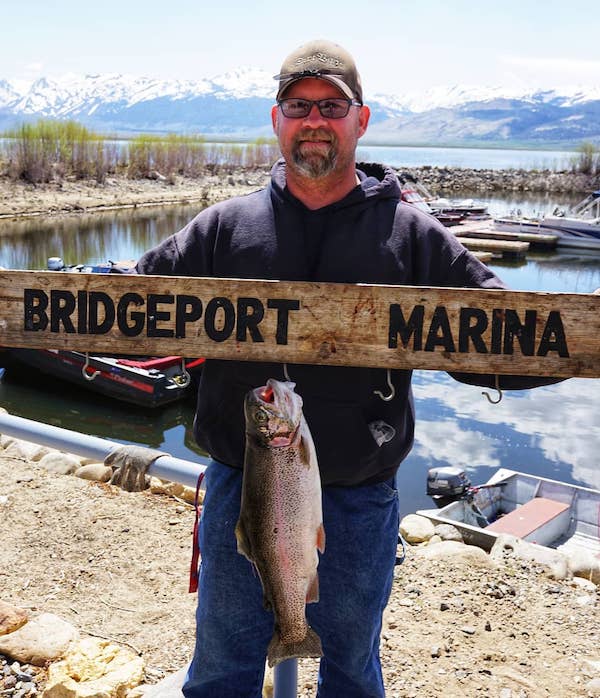 Bridgeport Marina Staff checked in with some recent catches and a fish report from a local angler who has been fishing there for years.

I have asked Michelle Johnston to write a fishing report for the reservoir. She has been fishing here for many years and I think she wrote a wonderful article.

"Afternoon showers with some blustery winds have been the norm this week but persistent anglers have shown that Bridgeport Reservoir remains one of the area’s premier fisheries. The week started off with a splash when Greg Franklin of Bozeman, MT landed a 6.5 lb Rainbow while dunking yellow glitter PowerBait. Bob and Dennis Aldridge of Dana Point and Anaheim Hills, CA used bait to their advantage as well, using PowerBait plus nightcrawlers to haul in three rainbows between 3 and 3.8 lbs along with several other ‘bows in the 1.5 to 2.5 lb range. Many anglers reported excellent results using garlic, rainbow, and chartreuse PowerBait while fishing from boats.

Trolling or casting nightcrawlers filled the nets throughout the week, most commonly in the calmer waters of early morning but several boaters claimed hefty stringers later in the day despite wind and scattered showers. Robin Guentert of Sierra Madre, CA captured a 5.14 lb rainbow while Dave Paul of Orangevail, CA took a 3.75 lb, vividly colored bow home for supper. Happy campers Nathan Delrio of Bakersfield and “Bones” Murillo, Ron “Roll” Lopez and Buck Murillo boasted solid stringers of fat rainbows with the largest weighing in at 3.5lbs. Not to be outdone, Torrance, CA boys Todd Yahn and Mike Stotesbury limited out with sizeable ‘bows, each scoring a 4.5 lb trout.

The Bridgeport Fish Enhancement Foundation (BFEF) put smiles on multiple angler’s faces this week when they landed BFEF tagged rainbows in the 2.75 to 9 lb range. These lucky folks receive a free entry (worth $75) to the Bridgeport Trout Tournament on June 22, 2019 with a chance to win cash and prizes. Ron Homstad fetched one at 2.75lbs, Mary Howe reeled in a 3 pounder, Dan Sullivan landed one at 3.25lbs, while long time Bridgeport Reservoir fans Frank and Marge managed to scoop up three of the tagged BFEF envoys. Float tuber Scott Norrie nabbed a 5.75 tagged fish, Josh Cadilla of Bakersfield, CA netted a 9 pounder and Tom Blotter of Minden, NV reported a catch while trolling a fly.

Brown hunters and catch-and-release proponents were not disappointed this week, either. David Vergini of North Hollywood, CA trolled Rapala lures to catch and release around 35 rainbows and browns over three days, including a hefty brown trout he estimated at slightly over 8 lbs. James Ybarra-Crawford, Doug Busey, and many other anglers successfully caught large brown trout, snapped pictures, and sent them back into the reservoir to grow a little bigger. Anglers did not limit their releases to brown trout; David Schroeder of Aurora, Co. and Tim Cole, of Gardnerville, NV, worked with local fishing guide Ken Hoffman to catch and release 19 fish, including browns, perch, and rainbow trout while trolling a variety of lures and nightcrawlers."