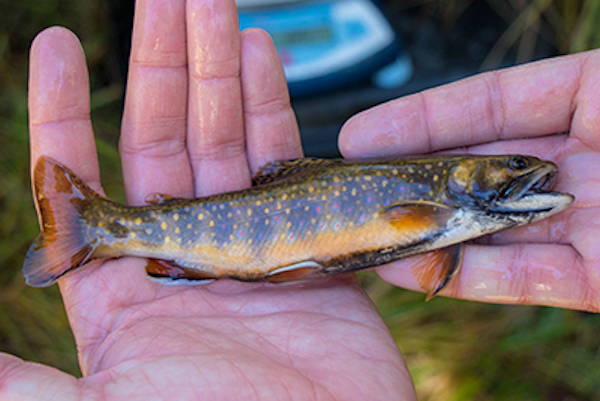 It’s a question that has been asked by more than a few eastern Sierra trout anglers: What happened to the fishing at Kirman Lake?

Kirman, a small backcountry lake north of Bridgeport in Mono County, has long been heralded as one of the very few places in the state where anglers could catch trophy brook trout.

While many high-elevation waters hold overpopulations of stunted brook trout measured in inches, the brook trout in Kirman were measured in pounds. Fish in the 2- to 4-pound class were common with numerous reports of brookies exceeding 5 pounds.

The lake requires a moderate, 3-mile hike to reach – just enough distance and difficulty to discourage casual anglers and help minimize some of the fishing pressure, particularly with so many great trout fishing options nearby. The lake is a special-regulations water with limited harvest. It is open to fishing during the state’s traditional trout season from the last Saturday in April to Nov. 15. Only artificial lures with barbless hooks may be used. Only two trout can be kept – with a minimum size limit of 16 inches.

Kirman was a destination known well beyond the confines of Mono County.

Rickards writes, “Those who have made the trek and landed one of these beautiful trout know what a delicate lake it is. Part of the promise here is more than just big brook trout – the lake also harbors big cutthroat. However, the cuts aren’t the primary focus of those who fish here. It’s those big, beautiful brookies that bring fishermen up the trail.”

Author Bill Sunderland likewise highlighted Kirman in his book “Fly Fishing California Stillwaters.” He writes, “The fish here, both brook trout and Lahontan cutthroats from Heenan Lake, grow exceptionally fast. A four-year-old brookie can be twenty inches long and weigh four pounds. Many of them are football-shaped, the result of their rapid growth.”

In recent years, however, the brook trout seemingly disappeared with anglers reporting fewer catches with no brookies in the mix. Fishing reports from Kirman dried up as well at local tackle shops with fewer anglers apparently making the trek.

What happened to Kirman Lake and its trophy brook trout is no mystery to CDFW fisheries biologists, who are committed to restoring the lake to its former glory.

“There’s no spawning habitat,” explained Jeff Weaver, a senior environmental scientist with CDFW who oversees the department’s Heritage and Wild Trout Program. “All the fish in Kirman Lake have been stocked to provide the recreational fishery.”

Brook trout were planted annually by CDFW until 2015 when hatchery problems prevented the raising and delivering of the fish.

What Kirman lacks in spawning habitat it makes up for in food abundance. Unlike many high-mountain lakes where trout eke out an existence in near-sterile conditions, Kirman is the equivalent of a 24-hour, all-you-can-eat buffet. The lake is loaded with all manner of aquatic invertebrates -- water boatman, dragonflies, mayflies and midges – along with high-protein leeches and shrimp-like scuds. The heavy population of scuds accounts for the tremendous growth rate and size of Kirman brook trout.

When Russell Black, CDFW’s new fisheries supervisor for the Inland Deserts Region, learned about the lack of hatchery plants and the poor state of the once-great fishery, he came up with a simple yet creative solution.

This past fall, work was underway at nearby Silver Creek to prepare the water for the eventual restoration of native Lahontan cutthroat trout. CDFW biologists electrofished Silver Creek to remove the non-native brook trout there to minimize competition with the native cutthroats.

Black’s idea: Take those brook trout and transport them to Kirman.

More than 1,300 Silver Creek brook trout in a variety of sizes were relocated to Kirman. Prior to release, the fish were measured and their adipose fins clipped. CDFW biologists encourage anglers at Kirman this upcoming trout season to record their catch and fishing experiences at angler survey boxes lakeside so they can track the transplanted Silver Creek brook trout.

Given the exceptional growth rate at Kirman, CDFW biologists expect anglers to get into some quality fish by the fall.

Even as CDFW shifts its statewide trout hatchery focus to raising and stocking native trout as opposed to non-native brown trout, brook trout or even domesticated strains of hatchery rainbow trout, biologists see a future for trophy brook trout in Kirman and are exploring options to resume annual hatchery stocking.

“Kirman Lake is one of those celebrated fisheries where we weigh management in favor of continuing that recreational fishery,” said CDFW’s Weaver, who himself has fished Kirman a dozen or so times over the past 20 years. “Kirman Lake is managed as a trophy trout fishery and we intend to continue to manage it as a trophy trout fishery. We’ve just been on pause as a result of the lack of stocking.”

The pause may be over, though, as CDFW intends to maintain the supplemental stocking from Silver Creek until regular hatchery plants can resume.

CDFW Photos. Top Photo: This small brook trout was one of many relocated this fall from Silver Creek to Kirman Lake, where it could potentially grow into a trophy-sized fish awaiting anglers this trout season.