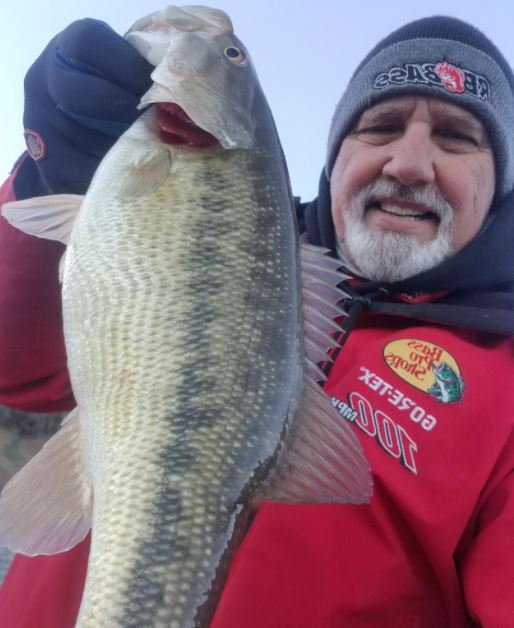 Air temperature:32 degrees when I left the ranch (Launch ramp was 40)

I got up this morning thinking it was going to be like what RB Angler Ron Howe said in his article and video posted on our RB Bass YouTube channel, go see it, Like and subscribe please, but it wasn’t.

It was 32 degrees when I left the ranch, ice on the windshield and all. It was a nice hour or so to the launch ramp, and it’s just getting light. Dang, the lower parking is full, what the heck…uh o, a high school Tournament. Cool, I’ve boated for them before.

Launch ramp was 39 but call it 40 degrees, and I’m running solo, and at my age it’s going to be a chore on launch and recovery, but let’s do it. Launched and docked the boat and parked on the upper level, got in the boat and took off to the middle fork bridge. Surprised on how much the water has dropped, so I took a hard left and decided to fish the main lake. The wind wasn’t bad yet.

First stop looked like a A rig, which on the 3rd cast produced a 3.17 spot that was tearing it up. The very next cast I hooked up with a 3.07 spot that puked his guts out when I got him on board. He coughed up about a dozen 3 inch shad.  See the picture. Dang what a mess! I continued on that point and picked up one more but it was only a 2 pounder. I noticed that the fish I caught were on each side of the point going back into this little bay with standing timber… I moved to the timber without any success. I thought for sure I’d pick up a largemouth in there but after an hour of quietly working the bottom, I left empty handed.

I quickly moved out to main point lakes and secondary’s trying to duplicate my catch, and was rewarded with another 2 pounder. After that the bite seemed to have quieted down. It was only 10 am. So I decided to make a move to the South arm, knowing that arm warms up first. A 10 minute ride found me on the East bank in a cove with water running into it. Spent 30 minutes wearing my arm out with nothing to show for it.

After an hour in the South arm, I headed back to the main lake points, but had to stop and rip bait, from the bridge out. I picked up three more small ones along the South bank of the bridge and that’s when a good wave hit me, threw me off balance, and spooled my reel. No time like the present to cut line out and re-tie, have lunch and something to drink.

Now where to go, yup back to the beginning spot to see if they reloaded, and they did. Picked up several more on each side of that point, one being a 2.80 and the other a 2.79…they were like siblings. I get the other side of that point and wham on an A Rig. Get this she was 2.84, I think another sibling lol

The bite cooled, so I took off and graphed the Spillway Bay north and South side. Didn’t see anything. I talked to several anglers there and they have nothing, they don’t get it, the bay was on fire a week ago.

The wind has turned the last 3 hours into a jacuzzi with 2.5-3 footers blowing about 15 mph so I called it a day, at 2:30, knowing the waves were blowing right into the ramp. I don’t think I have ever been off the water that early. I get there and find a loadout for a weigh in, with a high school tournament.  Crowded was an understatement. Being solo and “old” this was going to be a challenge. I give kudos to all the anglers there letting me dock the boat on the opposite side of the ramp, so I could take my long walk to get the truck and trailer. When I get back, they all used the outside lanes on the ramp, so I could get my trailer down next to the dock. With a little evasive maneuvering I trailered the boat and thanked them all.

After pulling into the parking lot to put things away, several came over to me recognizing the RBBass stickers on the boat, and while putting gear away I handed out some Xzone lures and RB Bass business cards to the kids. It made my day. I was excited to hear from several that they know RB Bass and follow us. 2 high school kids from Sutter even knew who I was… See, we are making a difference!