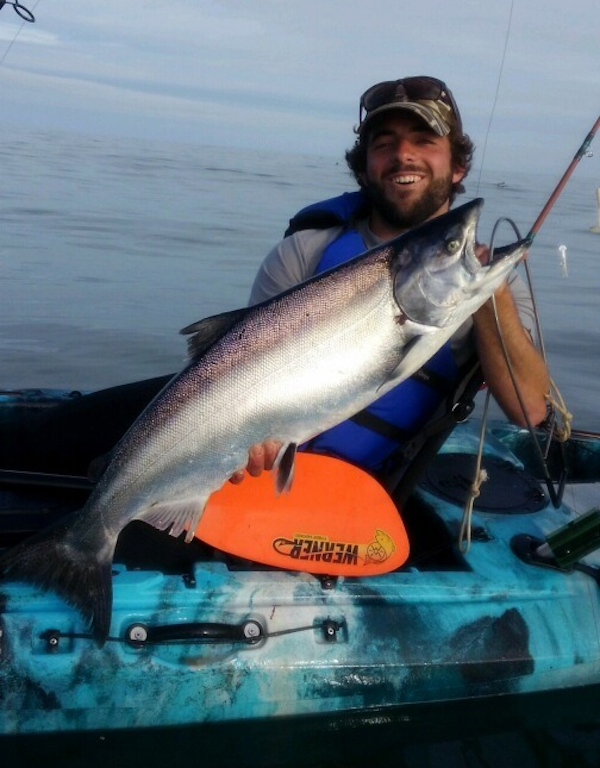 Inconsistent would be the best way to describe the salmon fishing out of Eureka at the moment. The beach bite that was holding steady for a few weeks off of Table Bluff has finally dried up. The last couple days the action has been slightly south of the entrance in 170 to 200 feet of water, roughly 8 miles offshore. A decent afternoon bite developed there on Tuesday and boats that stuck it out until the end were rewarded with some quality salmon. A very small fleet, including three charter boats, headed back to that general area on Wednesday. Reportedly, there were plenty of shakers, barely legals, and silvers, with the occasional king coming aboard. After a couple weeks of calm ocean conditions, the ocean could use some wind to re-charge the upwelling and reset the deck. And it looks like that may happen as winds are forecasted 10 to 20 knots for Thursday and Friday.

While anglers try and figure out their next move for salmon, tuna, and the warm water that holds them, are moving to the forefront. On Monday, one Eureka boat ran approximately 50 miles northwest to 62-degree water and quickly boated three quality albacore, all weighing 20-plus pounds. Another boat made the run from Trinidad and landed just a single. The warm water is moving in quickly, it was roughly 36 miles out as of Tuesday morning. Rough seas for the next several days will keep the fleet closer to home, but it won’t be long before tuna fever is running rampant.

Weekend Marine Forecast
Strong northerly breezes are in store for coastal waters through most of Thursday, with seas building in response. Winds are expected to increase in strength late on Thursday across portions of the northern waters. Friday’s forecast is calling for 10 to 20 knot winds out of the N and NW waves 8 feet at 8 seconds. Saturday is calling for N winds 5 to 15 knots and waves out of the NW 7 feet at 8 seconds. Sunday’s forecast is a little better, with winds out of the N 5 to 10 knots and waves N 5 feet at 7 seconds. These conditions can and will change by the weekend. For an up-to-date weather forecast, visit www.weather.gov/eureka/ or https://www.windy.com. To monitor the latest Humboldt bar conditions, visit www.wrh.noaa.gov/eka/swan. You can also call the National Weather Service at (707) 443-7062 or the office on Woodley Island at (707) 443-6484.

The last few days the salmon bite tailed off, but there were still some quality fish being caught. “The best bite has been about eight miles offshore just above the Eel River canyon,” said Tim Klassen of Reel Steel Sport Fishing. “Most of the fish are coming in 80 to 100 feet otw. There’s some decent sized fish in the mix, but there’s still quite a few in the six to seven-pound range. The one fishery that’s remained consistent is rockfish at the Cape. “Lost Coast bottom fish are in full stride,” said Tony Sepulveda of Shellback Sport Fishing. “Amazing rockfish limits with up to 20 huge vermillion in a trip. They were my most abundant species last week on several days. Lingcod to 33 pounds also hit the deck,” added Sepulveda.

Trinidad
According to Tyler Vaughn, who’s running the Wind Rose, the salmon bite has been slow this week. He said, “Most of the kings being caught are out in deep water and on the bottom. There’s been lots of bait on the reef, but it’s been loaded with silvers. There are a few keeper kings in there, but you have to wade through a lot of fish. The rockfish bite is going well, we’re catching a lot more variety. And the lingcod are showing in bigger numbers now. We’re getting close to limits on each trip,” Vaughn added.

Shelter Cove
The salmon bite is consistently inconsistent reports Jake Mitchell of Sea Hawk Sport Fishing. “One day they bite really well, and then the next day they don’t,” said Mitchell. “The wind has been absolutely relentless, so we’ve been limited on where we can get to. We’ve spent most of the time trolling around the whistle for salmon. Rock fishing hasn’t been red hot, but we’ve been getting limits when we put our time in. The lingcod bite remains pretty slow, we’re averaging about a fish per rod. Most of the rock fish action has been at the Old Man and the Hat.”

Crescent City
A few salmon have been caught this past week, but not many reports Chris Hegnes of Crescent City’s Englund Marine. “There’s really no concentration of fish. Guys are catching one here and there, but pretty much fishing blind. The California halibut bite has been really good with lots of limits being reported by boats trolling anchovies at South Beach. A few are also being caught by anglers off the jetty. The rock fish bite has been good, not great. It’s been somewhat inconsistent as well,” Hegnes added.

Brookings
“Salmon fishing improved close to the harbor over the weekend, but was slower early this week,” said Andy Martin of Brookings Fishing Charters. “Big schools of anchovies have drawn salmon close to shore, but rockfish are thick and have been hitting trolled baits. Some charter boats caught full limits of rockfish while targeting salmon.”

The Rivers:
Lower Klamath
The salmon action in the estuary really took off over the weekend, with quite a few fresh salmon being caught daily. There’s been a really good bite first thing in the morning, then it becomes a tidal bite. With all the moss in the river, the incoming tide has been the best. Typically, the outgoing tide fishes better, but with mossy conditions, the fish seem to be coming in better on the high tide. During the incoming high, there’s a lot less moss, which gives us about a two-hour window of moss-free fishing. Trolling anchovies behind a Rogue River spinner bait is catching the majority of the fish.

Upper Trinity
According to guide Steve Huber, the Trinity springer and steelhead season is off to a really good start. “First light is your best opportunity for salmon as they are moving into the holes and staying put. Plugs first thing in the morning then roe and tuna balls is your best bet. A good batch of steelhead have also entered the system. Fish are spread from Lewiston all the way down to Cedar Flats,” Huber said.

Lower Rogue
The Rogue Bay saw a good bite late last week as water temperatures hit 72 degrees according to Martin. He said, “Some guides had a fish or more a rod. The action has since slowed, but could quickly pick up again with this week’s bigger tides. Heavy moss had made fishing tough except for along the jetties.”