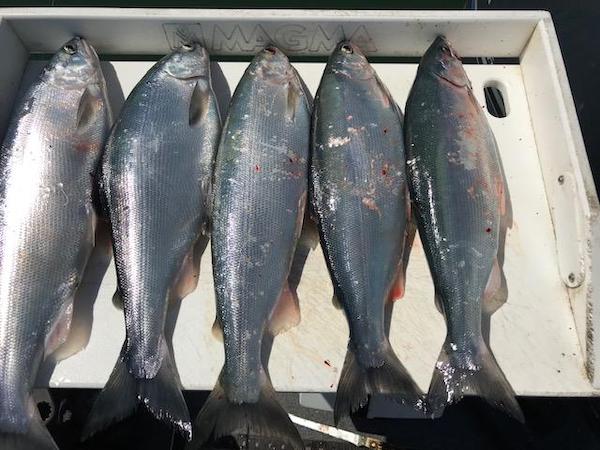 New Melones Reservoir's current lake level is 1046.40 and 41.60 ft. from full, down from the high level of 1057.05 on March 9. Water levels have begun to reverse the downward trend and have been slowly rising the last week from snow melt that should top off the lake at a comfortable elevation of 1058.00 before water releases exceed incoming water.  Water temperatures are 69-71d. and clear.  The Tuttletown upper ramp is operational as well as the Glory Hole Point side of the lake which has the high ramp working. Angels Cove ramp is also in use.

We like to promote catch and release on New Melones. If you do so, provide us a picture and bring it in for a copy or email it to us at gloryholesports@yahoo.com so we can put it on the board or in the newsletter.

Anglers FYI: For anyone with a potential lake record please call us at the store and hopefully we can send someone to weigh, photograph and measure the catch at the lake. GHS is the unofficial recorder of lake records for New Melones, and we understand there is sometimes conflicting interest in the welfare of the catch, whether or not to release the potential record, sacrificing your place as a record holder for the lake.

We do promote catch and release. For potential lake records, record the statistics of the fish... length, girth, weight and photographed at the lake before releasing her. If indeed we can verify the information that is provided, such as a witness, comparing the scale used with ours, a photograph with the fish hanging from the scale and can see the scale weight, etc...then we can accept this as proof. If your catch has expired than indeed bring it in to GHS so we can record it here, and you can have it mounted!G

TROUT
Ron Linn of Sonora landed a limit of Rainbow Trout off the bank up river off the bank using worms, his largest bow was 3 lb. 11oz.

KOKANEE
Right after our last fish report Kokanee on New Melones kicked off with several limits coming in to Glory Hole Sports. Gary Burns of Take it to the Limit guide service has been anticipating this years bite for some time now, and it is now upon us with some nice and fat Koks in the 1.5-2 lb. range and up to 16" in length. Gary says these are really nice Koks so far this year and expects them to get even better.

Jay Winchester of Lockeford was off the water and cleaning fish by 10:30, landing a limit of Kokanee up to 1.4 lbs. Jay was trolling a Apex lure down 40 ft. and was using a green dodger.  Best bite time was 9:00am

BASS
Rob Griffin came upon his PB ? with this beauty weighing in at 10.49 lbs. caught and released on a Yamamoto Senco.

CATFISH
Catfish are getting very active on the lake using cut baits.
Glenn "BIG CAT DADDY" Mitchell and Edward Winters were fishing Melones 5/6 and brought home a chest full of Catfish weighing up to 8.9 lbs.

When your nickname has Big Cat in it, don't expect to get an exact location on where they caught the fish but I was informed it was "here and there" if that helps.

CRAPPIE
There has been lots of reports that the Crappie bite on Melones is hot, with nice bag limits using minnows mostly, and crappie jigs.

Take it to the Limit Guide Service
What a great morning, Ed and his son Joe put limits in the boat early this week

Take it to the Limit is back on the water this year with one of the finest starts of Kokanee fishing I can remember.

We put our first limits in the boat April 22 and  it hasn't stopped.

The koks are really fat and healthy and we are putting koks in the boat up to 16"with most going 13" to 15", not too bad!

This last week we put Limits in the boat and we went out on 5 trips.

The hardest part of it all is finding the right depth. When the water was flowing out of the dam we were putting koks in the boat down to 52', now they have slowed down the flow and the lake is coming up again with the cold water from the snow melt and last week we were putting koks in the boat from 30' down to 46' with the surface temperature at 70.

Hoochies and Assassin spinners pink and green and watermelon A Pex did the trick this week.
The bite really gets hot for a while then slows down to well it's time to eat lunch and the put your sandwich down because there back. Put your time on the water to get you limits!
See Ya On The Water